What needs to be kept in mind when you select a pair of gloves?

It is a common mistake for people to buy goalkeeper’s gloves that are worn by their favorite player. It’s not always what’s best for you that’s also best for your idol.

Identifying the Hand Shape that is appropriate

Each glove is made to fit a particular hand shape and size. It’s pretty much a rule to pick gloves based on your hand type even though there are recommendations. When you feel that the glove you’re recommended isn’t to your liking, you can choose something else.

Roll Finger gloves allow more room compared to negative cuts. These are very popular glove type for people with broad fingers and hands. Wrapped or rolled around the fingers of the glove is latex material. When a goalie catches the ball, they have a lot more protection than they did before.

A glove with a more streamlined and tighter feel on your hand, the Negative Cut glove is recommended for goalies with slim or slender hands and fingers. Gloves with Negative Cut stitching are called Negative Cut gloves because they are stitched inside. For goalkeepers who like to feel the ball tighter and more firmly, this design will be ideal.

Goalkeeper Gloves with a flat or Positive Cut

In traditional Flat Cut goalkeeper gloves, the stitching is found on the outside of the glove, which is suitable for goalies with larger hands. Despite giving more space to the hand, this design does not compromise security or control.

For those with irregularly-shaped hands, the Hybrid Cut Palm goalkeeper gloves are recommended because they combine the above glove types. The hybrid glove is distinguished from other types of gloves by combining different designs in one. It is not limited to what features a glove manufacturer can use for a hybrid glove.

Put them on and see if they fit

Next, you should try on the gloves that are recommended for your hand size. Until you try a goalkeeper glove on yourself, you won’t really know if it will fit you.

If you want to perform your best for every game, you need the right goalkeeping equipment from a reputable brand like Just Keepers. The glove you choose for your goalkeeper goes a long way to assist you in achieving that. A goalkeeper’s glove may not be the same as another, which is why it is necessary to know what to look for.

THE GOALIE GLOVE – THROUGH THE DECADES

THE GOALIE GLOVE – THROUGH THE DECADES 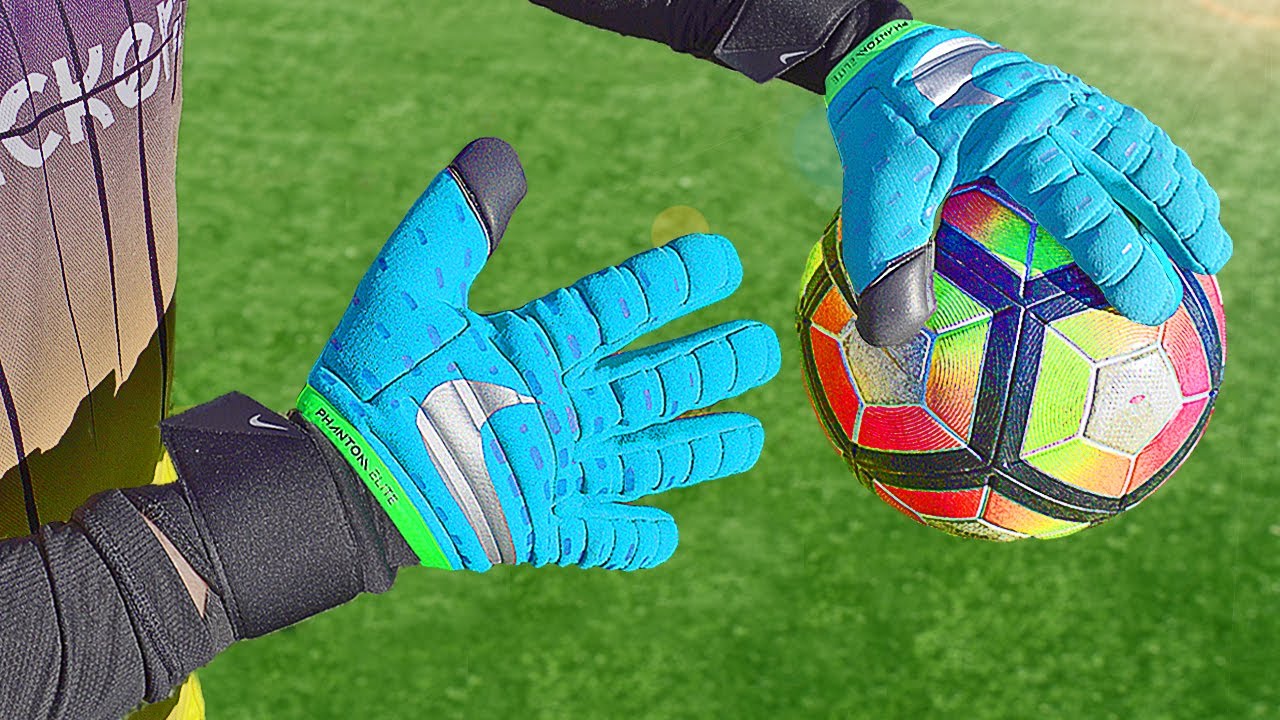 Football circles frequently discuss the idea that goalkeepers today are more like outfield players who wear different coloured shirts. It is true that goalkeeping has evolved throughout the years. A modern keeper has the same passing prowess and ability to control the ball at their feet as an outfielder. To be a great goalkeeper, however, you will always need to use your hands exclusively to keep the ball out of the net. In addition, perfect goalie gloves are essential to achieving their goals, regardless of their changing skills.

This article explores the history of this crucial piece of kit and how innovation in design has kept up with other advances in football kit technology.

Gloves: Getting a Grip

There are a lot of demands on the modern goalkeeper. As a result of a variety of factors such as the advancement of player technique and the design of footballs and football boots, etc., the speed of football travel has increased dramatically over time. Recent biomechanical research shows that professional footballers kick the ball on average at 78 miles per hour. However, a well-punched ball can reach much higher speeds. In 1996, a goal strike by former Sheffield Wednesday footballer David Hirst was recorded at 114 mph. Additionally, improved techniques, boot and ball design also make it possible for players to add Magnus Effects to the ball, allowing them to add dipping and swerving to strikes. Considering these elements, saving a shot becomes more difficult. The best gloves can therefore make a difference whether a goalkeeper wins a single game, a tournament, or a career.

However, wearing goalkeeper gloves does not just make sense for modern aspects of the game; they have a history that dates back much further, even predating the establishment of the English Football League. The first time goalkeepers wore gloves was in 1885 when businessman William Sykes discovered the possible benefits. He designed the first gloves from soft leather that included an Indian rubber fitting for maximum grip. Originally a football manufacturer, Sykes could have easily predicted the future ‘arms race’ between ball and glove decades ahead of his time. Although he never produced his football gloves in large quantities, he did go to significant efforts to patent and protect his designs.

Almost half a century passed before the next notable visionary promoted glove-wearing. One of the first professional goalkeepers known to have worn gloves was Amadeo Carrizo of Argentina and River Plate. He wore gloves during the 1940s and 1950s. A white pair made of cotton he wore for more than ten years.

Former England goalkeeper Gordon Banks was the first well-known name to endorse goalkeeper gloves. In 1966, he wore a pair during the World Cup. Over time, Banks experimented with various glove types, realising that gloves had many advantages over bare hands. Banks wore the first gloves specifically designed for goalkeepers at the 1970 World Cup – four years after wearing them for the 1966 tournament. The gloves made this time were cotton with rubber dappled strips frequently associated with table tennis bats. In the video of his legendary ‘save of a century’ against the Brazilian legend Pele, his gloves are visible. As more keepers began to use gloves to get a better grip, more warmth, and better finger support, his conversion to gloves wasn’t unnoticed.

A quick follower of Banks’s guidance, Peter Bonetti became Banks’s understudy for England. His gloves too had a large B sewn on the back, and he is remembered for wearing the first personalised brand made by Sondico. Sondico cleverly targeted their marketing to the UK’s young goalkeepers. These goalkeepers, who were previously wearing gloves such as those used for gardening, wanted to emulate their heroes.

Well-established sportswear brands from both the British and the continental markets quickly seized on the opportunity. German glove companies Reusch, Uhlsport, and Adidas dominated glove production throughout the 1970s. As they experimented with new designs and materials and sought endorsements from the biggest names in soccer, they fed a growing obsession among goalkeepers to use the most effective gloves.

Sepp Maier worked with Reusch, traditionally a manufacturer of alpine ski gloves, to design pairs to meet mass production needs. The company quickly became a market leader and pioneered the use of latex palms and non-absorbent fabrics with little or no weight. Today, Reusch is considered to be one of the leading glove manufacturers.

Despite this, it was not until the 1980s that the market for goalie gloves really exploded in terms of glove design, style, and added features, such as weather protection.

From the beginning of the 1980s, wrist support became a standard feature on all goalie gloves. Adding support to the wrists increased confidence for hard shots, as well as holding the latex-covering in place for an improved grip.

In the late 1980s and early 1990s, the roll finger grip emerged as the next development in glove designs. Gloves used to be made of a latex palm that was hand-shaped and stitched to the rest of the glove (also known as a flat-palm glove). A roll finger provided a snug fit for ball grip since the latex could wrap around each finger. To avoid direct contact with the ball, the stitching was strategically placed at the base of each finger.

It was Reusch who developed the first roll finger with the classic International model. Other companies, however, quickly added roll finger varieties to their collections. Among the first to champion the roll finger was the USA goalkeeper Tony Meola at Italia 90, who wore a yellow version of the International glove. The German national champion at Italia 90, Bodo Ilgner, wore a pair of Reusch with the colours of the German flag.

Reusch then started writing their name across the knuckles in bold letters, increasing their marketing coverage. Similarly, Uhlsport began to experiment with colours to catch the eye, as demonstrated by the bright pink classic 036 worn by England’s Peter Shilton and the Azuri blue version worn by Walter Zenga of Italy. Photographing gloves while trophies from the World Cup and other high profile tournaments were held aloft was invaluable marketing for any company. It was thus that the race to sign up the best club and international keepers began. Sportswear companies such as Puma, Umbro, and Nike jumped on board in the 1990s and began introducing their own gloves.

The next technological advancement, however, came from Adidas in the mid-90s. In this development, protection became a key component. Adidas Fingersave Series includes plastic splints along the back of the fingers to protect them from injuries, mostly caused by fingers being bent back from the ball. Keepers are prone to finger injuries, so protecting against damage makes the Fingersave an attractive product.

Another wave of new glove manufacturers emerged around 2000, pushing glove design in a new direction. Selsport developed the classic Wrappa glove that redefined roll finger gloves. It offered a highly cushioned glove with an exceptionally soft latex grip. Selsport developed gloves specifically for wet weather conditions. As the glove becomes soaked, the grip gradually deteriorates, but most gloves provide excellent grip when the ball is dry. The company quickly signed up many young goalkeepers playing in Britain, and this was reflected in its decision to become a major player in the market.

Some gloves seem to have gone full circle, with technology having a reductionist feel. Traditionally, gloves have had Velcro wrist supports, but these have now become significantly longer. The new glove offers little wrist protection, but also offers a full range of motion. With the Latex palms in the negative cut, a traditional flat-palm glove is now more comfortable with internal stitching and gussets adding a snugger fit and allowing for a closer contact with the ball. This type of glove is at the top of Adidas’ range and is worn by top players like Spain/Manchester United’s David DeGea and Germany/Bayern Munich’s Manuel Neuer.

Gloves, which were hardly worn before the 1970s are now a key component of a goalkeeper’s kit, and are available in different materials, designs, colours, and fits. There have been many changes in glove technology since the 1970s, some remaining and others fading away as new and improved designs emerge. In what began as a kit to keep the hands warm, gloves have grown into an industry worth millions of dollars dedicated to improving keepers’ chances of keeping the ball out of the net. Over 100 years after William Sykes recognised the value of the goalie glove, there are still many companies around the world that strive for the perfect fit.

How to Pick the Ideal Goalkeeper Glove

Tips on How to Create a Relaxing Atmosphere at Home